The rubber hits the road. Sort of. 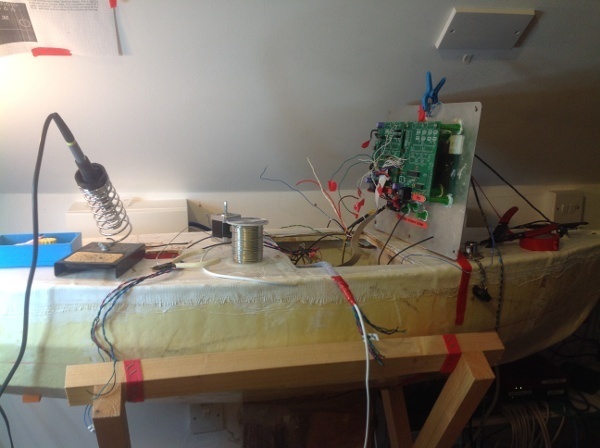 Due to other, exciting distractions (which I will mention in a later post), I haven't had a chance to keep the blog up to date. Still, work progresses on the boat, and that's the important part. Last month, with the keel now in its new position about 30mm further back along the hull, and sealed into place, it was time to add the electronics board.

This involves soldering the umbilical (ribbon) cable from the Sailboat Guidance System to the onboard wiring harness. It also involves soldering the two stepper motors to the harness, and fixing the rudder and sail steppers into place. There is still some work to do in terms of installing the temperature sensors and the tilt-compensated compass, but the key elements are in-situ. This includes the two Atmel boards based on the ATmega8, the PC Engines "Alix" board running FreeBSD, the current amplifier (measures the battery current and converts it to a voltage), the two stepper controllers, the mission key switch, and the deck plugs.

I am using an old Asus eeePC as an interface to the electronics, while it is under development. I will bring the Asus with me to each of the test launches, for any last-minute tuning or logging. As it happens, I once worked for Altos Computer Systems in California, and the company was bought by Asus. So, for the few remaining months before I left to go somewhere else, I was officially an Asus employee. Apropos of nothing... :)

I've also been working on the simulations of the GPS and Igor interfaces, and the Redis database. I am recoding the interface format to the Atmel to make it a bit less human-friendly, but a bit more machine-readable. Currently, the interface is comprised of text commands sent over the serial port. I am switching to a six-byte packet format.

I have also started converting the PID controller to C code on the Atmel chip, and hope to see the steering system kick into life any day, now.

All in all, lots of work has been done on the boat in the last few months, and February will mark the first anniversary of the project.

I have some exciting news which I mentioned above, and I will post on that in the next week or so.

I also have an update on the sail design - it's quite a change from the original plans, and I will post more on that, soon.