Cutting out the Bulkheads. 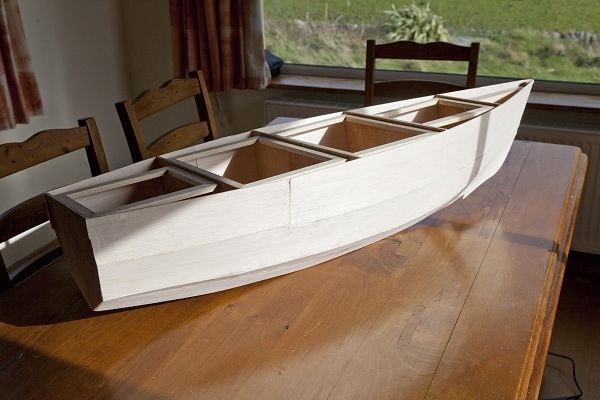 A slight change from the version of the hull from The hull starts to take shape.; the hull height from the base of the hull to the deck (not including the keel) was 180mm. As I started to look at cutting bulkheads and the transom, it struck me that the hull is quite shallow. It looks fine from DelftSHIP but that's a low freeboard.

The beam of the boat is around 360mm, which is twice that depth. The original intent was to create a hull which wasn't too "beam-y" but that's a 2:1 aspect ratio. I decided to increase the hull height by 50%. Luckily, DelftSHIP will scale your drawing in any or all of the three vertices. So, five minutes later, and we have a new hull with a 270mm depth.

Normally, people would design the sail shape and hull shape before committing to the hull, but I wanted to arrive at a series of workable dimensions for the hull and then look at how to power it. The reason I can get away with this, is because we won't be squeezing the last drop of performance out of the hull - we don't need to. Wind power increases with the square of the wind speed. As a rule of thumb, we could devise a "maximum useful" wind speed for any given hull length. For most keel boats (not ocean-going racers, mind you), wind speeds above around 25 to 30 knots are "strong" and the crew will reduce sail. Again, it depends on the size of the hull and the proficiency of the crew, among other things. For our boat, I suspect wind speeds above 12 to 15 knots will be too strong. In other words, the boat will pretty much always sail to its maximum polar.

What this means is that I don't have to worry too much about "light winds". As a result, I'm not forced to maximise sail area and righting moment. I can design the hull I want, and then look at how to power it up. I'm going on the assumption that a 30 knot wind will be fairly typical, particularly for the downwind leg after "butter point." Also, if we look at the 1.2m hull as an example, it has a maximum theoretical displacement speed of 2.65 knots. If we assume the boat won't be surfing or planing too much, then the wind speed is over ten times faster than the hull. That's significant. That's very significant. Downwind, the force on the sail is a function of the wind speed minus the hull speed through the water. Ideally, you want the hull going very fast, particularly when gybing, because it takes the sting out of the tail. We won't be able to do that, which means the gybes will be very dramatic. Luckily, we can reduce the weight in the rig and in the sail, so that the boat doesn't end up on its ear through a gybe. It's actually possible that the boat won't be able to gybe in strong conditions, because at a TWA of 150 say, as the rudder tries to bring the wind around to the back of the boat, the sail trim will force the boat up to wind again. Net result: no gybe. Effectively, the boat is pushed as fast as it can on the current tack, rudder hard-over.

In a dinghy, it's often better to tack up through the wind, rather than gybe in very strong conditions. In effect, you do a 270 degree turn rather than a 90 degree one.

Also on this point of sail, the keel is dead weight. It has no useful function except to slow the boat down. Keels are most effective going upwind. However, it would be wrong to assume that the entire trip will be one long sled-ride, so the keel has to stay put. Also, upwind performance can't be ruled out.

However, the point of all of this is to say that the sail form and keel form can be decided quite late in the game. The intention is to experiment with a range of sail types and keel types, and ideally to race one against the other. We're looking at being able to swap out the keel and also to swap out the mast and boom, leaving just the hull. For in-shore tests, we'll use a classic, stayed mast. But for the main event, we'll probably go with an unstayed mast.

But, we're getting ahead of ourselves. Today, I cut the wooden trim for the hatches. These are square frames, which go between the bulkheads to support the deck and to make a crude superstructure. I also marked out the bulkhead shapes, and would hope to cut those out, later in the week. The hatch frames will be glued to the inverted bulkheads, and a keelson will be attached which defines the underside shape of the hull. When that's done, the herringbone shape of the hull will be completed. I can then start to attach the side "planking" and begin the arduous process of taping and epoxying the hull. The transom and bulkheads, as well as the keelson, are made from 6mm marine ply. As it stands, the planking will also be formed from 6mm ply, although I'm not looking forward to bending that shape over the fragile bulkheads.