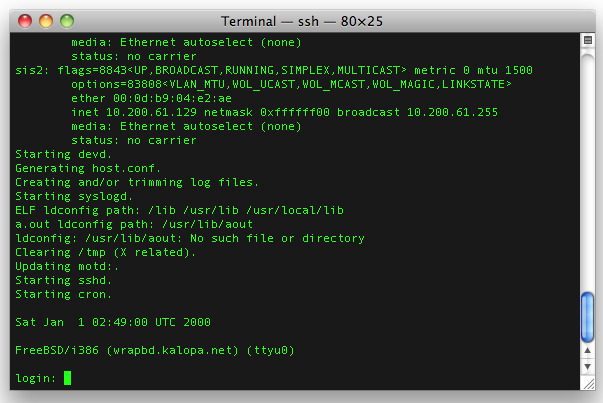 The board runs off twelve volts, and consumes an average of about 250mA. A miniscule amount, compared to some of the other equipment running around here, but on Beoga Beag, 250mA is a lot. I discussed that in Battery and Solar Design. The particular board I'm running here is a 1D board with 128MB of RAM, and the entire OS on a single 4GB compact flash card. In fact, the kernel, the root filesystem, and /usr all occupy less than 650MB of disk space! Try that with a Windows machine. The /cfg configuration partition is only about 3MB, and I have a custom partition called /app which contains all of the code for the particular application. It's also 650MB, which is overkill given that the application is probably less than 10MB in total. The remainder of the disk is given over to a logging partition.

The actual board which will set sail, will actually be an ALIX 3d2 board, as the WRAP board doesn't include USB ports and I'll need at least two. For now though, I can do a lot of the early testing, using the WRAP board.

PS: Hoping to have some updates on the hull design, in the next week or so. Stay tuned!