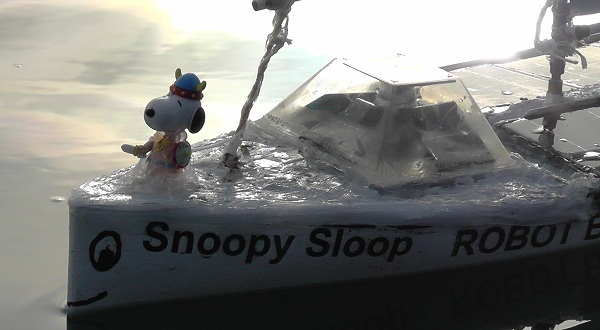 Today, March 23rd, 2013, Team Joker are planning to launch their ninth boat, Snoopy Sloop. This has been an educational (and obviously fun!) experience for Robin Lovelock and his fleet of robotic warrior boats. Here in Beoga Beag land, we wish them well.

The Team Joker guys have gone for a rudimentary approach to Robotic Sailboat Design. I've said it before and I'll say it again, the biggest enemy to man and boat "out there" is Mother Nature. Boats and electronics are strange bedfellows. Any electronic gear you have on board, is liable to fail just when you need it. Salt water (and salt air) is highly corrosive, and can make bits of a circuit board in seconds. Add galvanic currents and now you're not just looking for hidden salt water, but corrosive currents that you can't even see. You'll find that most sailors eschew any type of electric winch or mechanical aid to sailing, not due to some ill-conceived need to do it for ourselves, but because we know that some day, when we're on a lee shore, and the wind is howling, the electric winch will stop working. It's not an irrational fear, it happens every day. Good navigators will take celestial readings on long voyages, just in case the GPS gives out, or the power goes.

Robin and Team Joker have taken the KISS principle to it's greatest level of purity so far in this competition. As you'll know from reading this blog, I've spent a considerable amount of time working out the best way to sail the boat to the wind. Snoopy Sloop has ditched the wind direction indicator and instead the GPS-enabled autopilot will drive the boat directly to the waypoint. Downwind, this will work just fine, but when the wind is anywhere from -45 to +45 off the bow, the boat will stall until the autopilot decides on an alternate route or the wind changes. They have decided that this is a better alternative than bringing a lot of sensitive wind gear which is liable to fail. This is an interesting idea, and I have to declare my scepticism, right now. However, they are spot-on in terms of reducing the complexity of the systems, particularly those which are exposed to the sea air or possibly to salt water. It's a trade-off, and it will be interesting to see how Snoopy does when the wind is on the bow. It has also meant that they have had to choose a particular point of sailing as their ideal, and set the sails accordingly. By the looks of things, they've chosen a beam reach. Time will tell, how well that works...

Wisely, Robin has chosen today as his launch date. This is good for micro-climate and macro-climate reasons. Firstly, we have a low pressure system off the west of Ireland at the moment, which is giving us some very strong weather. However, from Barton-on-Sea where Snoopy will launch, the winds are easterly. That means that Snoopy will be able to run downwind to the start line. In fact, we're due to get Easterlies for the next week or so. Snoopy is probably a weeks sailing from the start line at the speeds that Robin has seen to date. Mind you, he hasn't seen the affect of 30+ knots of breeze behind you. The reports at the moment are varied. The GRIB data is showing quite strong winds, but the forecasting sites are showing about 8 to 10 knots which should be fine. Wave heights are an issue at 2.4 metres, but that's nothing to what Snoopy will see, later on. By choosing Easterly winds for his launch, Robin is giving Snoopy a chance to get some big miles in before he needs to start making upwind passage. If he is lucky, he could make the Azores (and the trade winds) in favourable winds. But, if I know anything about predicting weather patterns at sea, it is the fact that I know nothing about predicting weather patterns at sea. Neptune doesn't look at the GRIB data, and decides his own course of action based on his whim. Let's hope for Snoopy's sake, Neptune is feeling magnanimous.

The other reason that this weekend is a good launch window is because he may just skirt past Hurricane Season, again if he's lucky. Hurricane season begins on June 1st and extends into mid-November. The strength and frequency of hurricanes during that window, isn't quite the nice bell curve we might wish for. The rule of thumb is that "you shouldn't see hurricanes before June 1st" and "you're unlikely to see them after mid-November." No-one is saying that the weather patterns obey the calendar that nicely. It's more of a probability thing. The only worry would be that Robin predicts that Snoopy Sloop will "bang the corner" at the Azores on or around June 9th. Naturally, this depends on a huge number of factors, few of which we can actually predict. However, it does mean that Snoopy will be turning right for the Caribbean, a week after Hurricane Season begins. So why is this a "good window"? First off, I think Robin is being pessimistic about the boat speed. If Snoopy is on a run, with a thirty knot tail wind, you'd hope he would sail a lot faster than 1.5 knots. Downwind, with the sail out, it is the apparent wind speed that does the damage. I've often noticed, when taking people out for a sail, that we beat out to some place in the bay, and then run home. Invariably, non-sailors will comment on how the wind has really died off and it's turned into a pleasant day. The reason for this is simple vector arithmetic. The wind hasn't changed. If we're doing 6 knots upwind, the perceived wind speed on board will be almost 16 knots if we're beating into a 10 or 12 knot breeze (it's not quite an addition because we're not pointing directly into the breeze). 16 knots, when you're in the cockpit, or up at the bow like Snoopy, is breezy. You'll definitely feel it. Turn downwind, and now the wind speed is 4 to 6 knots. It's probably less because we'll also be going faster downwind. So the 16 knot breeze has given way to a nice, 4 knot cooling breeze. The truth is, the wind speed hasn't changed. You get the idea. Anyway, if the boat is only doing 1.5 knots downwind in a 30 knot breeze, that's like sticking the boat with the sail stuck out, into 28.5 knots of wind. That's a lot of force on the boat. The faster the boat goes through the water, the less force. So, I'm thinking that Snoopy will start surfing, in bigger winds and bigger waves. In which case, he should get to the Azores before the start of hurricane season.

Also, all going well, he should be well across the Atlantic before the hurricanes wake up from hibernation. So, if Snoopy is lucky, he'll get fair winds to the Azores, and if he's doubly-lucky, he'll avoid the big blows all the way to Saint Lucia.

What's interesting about todays launch, though, is it unofficially closes the launch window for the rest of us. If you're planning on doing the East-West race, you can consider the barn door is now closed until much later in the year. This is why we don't have a prototype for Beoga Beag, yet. We knew we wouldn't make the April 1st deadline on the start line, so we're better off aiming for a deadline later in the year. Probably mid-October. As I mentioned in a previous post (The Timetable.), we also have to watch out for the large fleet of boats from the ARC, in late November.

We still have a lot of work to do before then, and we're not putting a huge amount of thought into the exact date just yet. In the meantime, Bon Voyage, Snoopy! May you have fair winds and pleasant seas all the way to the Caribbean.

Update: Snoopy didn't launch last week, as the waves were too high. As Robin is launching from the beach, he's not in a position to get Snoopy out past the surf line, so Snoopy has to brave breaking waves before ever setting to sea. As a couple of abortive attempts, Robin and Snoopy retreated home. They plan to try again, next Saturday (the 30th).