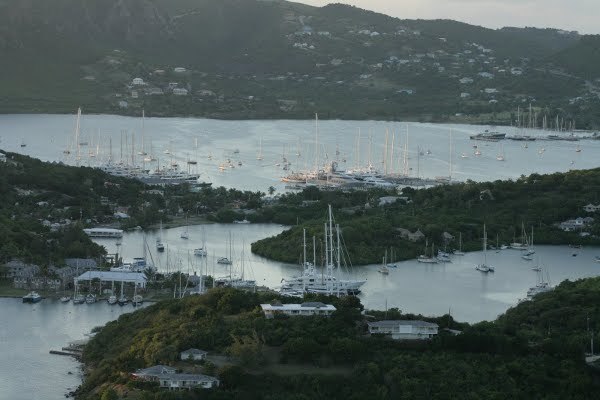 A view of English Harbour in Antigua

A first pass over the route and the finish line suggests Antigua could be a good destination. We last visited in 2009 and this is as good an excuse as any, to go back.

The finish line is from latitude 10 degrees to latitude 25 degrees North, which is all of 900nm long. However, according to the rules, we must declare a 50km (27nm) segment of that finish line. Although the finish line is pointing True North, when you consider the race is from Northern Europe, that means that the line is heavily biased towards the starboard end. The Northern tip, in other words. Finishing on this end of the line shortens the final leg.

We're assuming that we actually want to recover the boat, after the finish. A reasonable assumption, don't you think? If so, we'll want to fly in to somewhere with good (read: cheap) flights from Europe and not too far from the finish line. At first glance, the British Virgin Islands (or the USVI) might be a good place to target, as there are a lot of flights in and out of Beef Island. The truth is, some of the flights are via Antigua, and also, it's a long way from the finish line. Some of the French islands, such as Guadeloupe and Martinique look good as well, but according to SkyScanner, flights are about a third again more expensive than flights to Antigua.

So, Antigua is a good all-round compromise. The line is around 100nm from English Harbour. We have concerns about the boat sailing too close to civilization, due to the risk of a collision or theft. So, we want to retrieve it from fairly deep water. An eight hour sail from English Harbour would be about the limit of time and patience. It should take the boat around two days or so to make it to Antigua after crossing the finish line. The plan would be to charter a boat in English Harbour, probably a Catamaran, and head out to meet the boat after it crosses. We would set out to the rendezvous point about a day after the boat has crossed the finish line.

In terms of the 50km radius, I would reckon the best place on the line is at a latitude of 18 degrees and 14 minutes, which is just over halfway up the finish line, as it happens. It's a good compromise of keeping to the starboard end as much as possible, while staying relatively close to land. The finish line from the boat's perspective would be twelve nautical miles either side of that point. The official finish line would be 25 kilometres North and South of that point.

So there you have it. Ireland to Antigua.