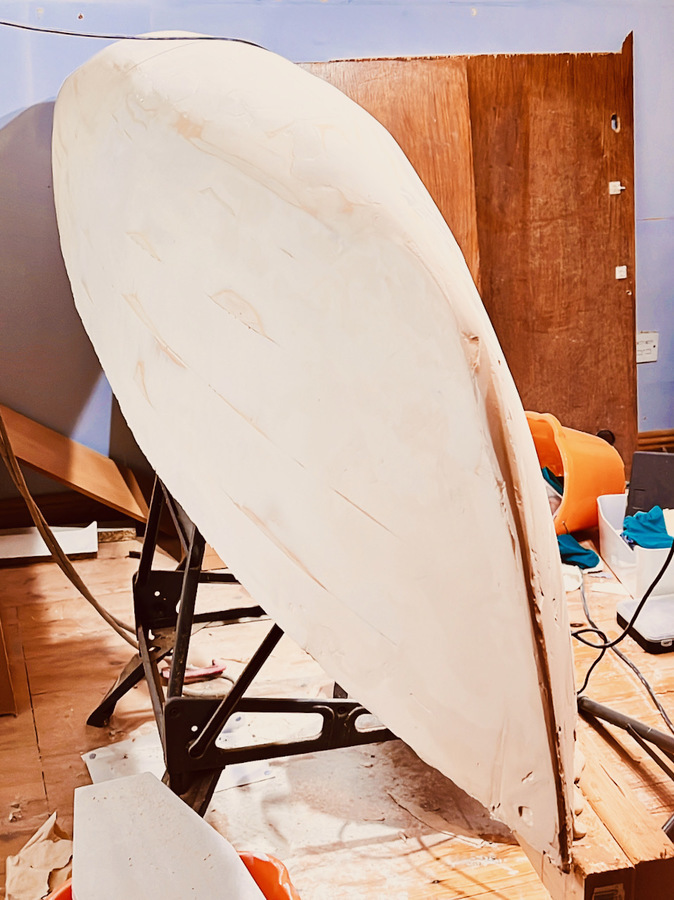 It's taken an incredibly long time, but Hull #2 is on the verge of being ready for some layers of chopped-strand mat and woven roving. The image above is of the inverted hull, still attached to the strongback. Some layers of thin balsa over ten or eleven stations, and then coated with West Systems filler and epoxy, and faired to a reasonably smooth surface.

This technique is known as cold-moulding (or cold-molding in the US). You start with the straightest wood boards you can find. In my case, a couple of 2"x3" planks glued and screwed together. Next time, I think I'll use T2020 profile aluminium, but the two-by-threes worked just fine. From there, I cut out the "sections" from the plans. If the boat were solid, the sections would be slices of the solid boat at 200mm intervals. I'm sure there's a picture somewhere. These are cut from 6mm marine ply. Each one is mounted in its respective position above the strongback, like you see in this image:

From there, long strips of thin balsa wood are glued/tacked/stapled onto the sections, to give a rough approximation of the hull shape. As the hull has a compound curve (the strips need to bend across their width as well as their length), thin balsa is relatively easy to work into shape. I do two layers of balsa in order to avoid hard edges when a balsa sheet meets another. As this still has deformations due to hard edges here and there, I learnt my lesson from Hull #1. On that boat, I discovered that minor imperfections in the hull get amplified by the time you get to the outer surface. So this time, I wanted to try and get as smooth a surface as I could. I coated the hull with West Epoxy and fairing compound. Then, as that dried, I sanded it back and repeated the exercise. I made a rookie mistake in the fairing compound in that it needs to be like peanut butter. More often than not, I ended up with what's called "ketchup." As most of the hull is vertical while it's on the strongback, the filler would simply roll down the side of the boat. Lesson learnt. When you're mixing to a peanut butter consistency, go much further than you think you need, during the mix. I'd mix it until I thought the stuff was pretty viscous, but it would still roll down the side of the hull, causing sagged lumps of filler which needed to be sanded back.

At one point, I was very tempted to stop work on this as a hull, and instead think of it as a plug. As a hull, I can now add three to six layers of fibreglass to the outside, and a similar number of layers to the inside, thus sealing in the filler and the balsa. This gives me a traditional GRP hull comprised of a thin layer of glass, an inner balsa layer, and another layer of glass. This gives strength in the same way that an I-beam is stronger than just a single piece of iron. However, in my case, the balsa layer is quite thin. On a full-sized boat, the balsa layer could be 20 to 50mm thick. If I were to use it as a plug, I would instead epoxy the entire hull as-is, or paint with what's called a "release" gelcoat. I would then coat it with six to twelve layers of wax. After that, I could paint it with mould gelcoat, and build the hull backwards from there, ending up with a mould. I eventually chose not to do this because a) it would take even more time, and b) I don't think the hull is good enough.

Let me explain those reasons a little bit more. If I wanted to produce a mould, I would need to really get that hull super-smooth. As it stands, it is quite good but it is a long way from perfect. After that, I'd lay up gelcoat and then multiple layers of glass, and finally some structural wood. When I was finished, I could smash (yes, smash!) the original plug and remove it from the mould. It would be destroyed. (I know. Even typing that makes me shudder!). At that point, I'd have to clean and wax the new mould and then turn out one or more hulls from the mould. While it would allow me to produce further hulls much more easily, I have been mucking around with Hull #2 for a few years now, and progress has stalled while I tried to get it to this point. Delaying the project to produce a mould just seemed like a massive step backward. But also, I know from working on the balsa wood that the stations are not perfectly symmetrical. Especially at the bow. If you look at that photo for the stations, above, you can see that Station #2 isn't perfect. I would prefer to get the stations cut on a CNC (rather than a jigsaw, which is what I used). From there, I could carefully lay up balsa and foam to get an ideal hull shape. I wasn't too concerned about making the perfect hull shape which is why I ignored the incorrect curvature of the balsa wood. If I were starting out just to make a plug, I'd have also used high-density foam between the stations, and sanded the hull into shape, rather than using balsa wood. The balsa is good for giving you a curved surface between two stations, and showing you how the hull might look, much in the same way as a spline might, but they also have hard edges which need to be faired back. A combination of foam board and filler, along with a lot of spare time, would allow for a very effective plug from which to pull a mould. Anyway, decision made - this baby is for the water!

The next step from here is to cut some CSM (chopped-strand mat) to size, and mix up some resin. Then I can start building out the actual hull shape. I suspect I'll use CSM for the first layer, followed by woven roving. Then another CSM, another woven roving, and finally a "tissue layer" of fine CSM. However, I have a problem. The filler is epoxy-based, which means that I can't use a polyester resin for the glass layers. Polyester resin doesn't bond well with epoxy (although the reverse is not true). It's quite possible to use epoxy to lay up fibreglass but it's expensive. Also, the CSM rolls I have are for polyester resin. If you're interested in knowing why there's a difference in the two, Andy at Boatworks Today has an excellent video which discusses this very thing. In short, the bonding agent for the CSM needs to dissolve. But a polyester resin bonding agent won't dissolve in epoxy. I really want to use polyester resin, because I also have a few large containers of the stuff, and West Epoxy ain't cheap. But I can't jeopardise the structural integrity of the hull if the glass doesn't bond to the balsa layer. I may have to go and ask Andy...