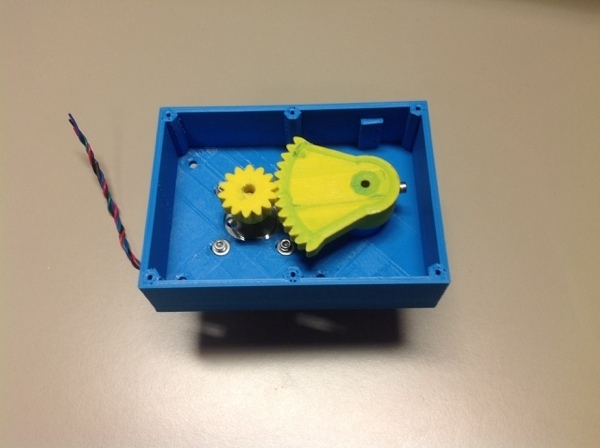 I have uploaded a video (to YouTube) of the rudder mechanism on Hull #1 working from end-stop to end-stop. (Excuse the video quality, I used my phone to record it.)

I connected an Arduino (Mega2560 if you want to know) and a SparkFun stepper controller to the stepper motor which drives the rudder. I wanted to exercise the tiller gears and the rudder shaft for a while. The video shows the rudder swinging from almost completely to Starboard, all the way back to Port.

It actually moves around 160 steps to Starboard and 170 steps back to Port. This is why there's a slight crunching sound, as the main gear hits the stops. I have a zero-sense microswitch which can detect when the rudder has come all the way over to Port, but it isn't connected as yet.

Losing track of where the rudder actually is, isn't a problem because of the zero-sense microswitch. The software can recalibrate the rudder position by bringing it all the way over to the port side until the microswitch acknowledges it has hit the end. From there, it is around 80 step increments to the zero position. I say "around 80" because I still need to accurately calibrate where the rudder-centre position is in relation to the zero stop.

The other aspect of all of this is the PID controller which controls rudder position. Thanks to the I-term of the controller, if the rudder loses sense of where it is, the controller integrates (sums) the error and will continue to apply rudder angle above and beyond what the P-term thinks is reasonable until such time as the desired course is achieved. I will need to remember to clear the integral-error whenever the rudder is recalibrated. Again, this isn't entirely necessary as the error integral will work itself out one way or the other.

Hull #2 is using a worm-gear motor drive for the rudder, which is a different type of design. The advantage of a worm gear is that the rudder won't slip out of position if power is removed from the motor. Mind you, that can also be a bad thing if the rudder is nudged while transporting to the sea. If the worm gear won't budge, then the attachment between the rudder and the rudder shaft will be under heavy torque. Likewise, the gear at the top of the rudder shaft may lose its locking against the shaft.

By way of contrast, a stepper motor consumes power regardless of rudder position.

As of yet, I'm not 100% convinced that the worm-gear mechanism is an improvement. I anticipate that the boat will end up making a lot of small rudder movements, and as a result, the opportunity to disable the motor power will be short-lived. It is possible to dampen the enthusiasm of the rudder worm-gear motor by appropriate tuning of the PID controller and ignoring small course errors. But I suspect over the course of a long navigation, the power saved may end up being negligible. Unfortunately, the loss of an electronic slip-clutch may turn out to be hazardous. Time will tell...

Astute observers will notice that the boat is now a uniform blue colour. The original colour reflected the white of the Polyester resin, with a slight yellowing due to the outer epoxy layer. I painted the entire boat, above and below the water line, in a primer and then a blue marine paint. Naturally, as it's a marine paint, it wasn't cheap. I would have preferred a more obvious colour such as yellow, but it was more a question of what they had in stock in the local Chandlers.

The hull isn't antifouled as I expect this boat (Hull 1) won't spend more than a few days at a time, in the water.