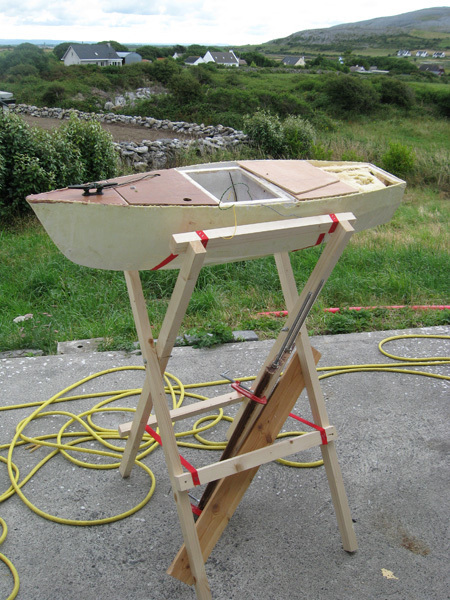 It's been pretty quiet here on the blog front for a couple of months due to work and life pressures, but efforts on the hull and keel have continued unabated.

Much to report since the last post, including two transatlantic attempts (neither of which have succeeded, yet).

I have been looking at options regarding the wind direction indicator, and there are some promising alternatives. On the hull front, Coleman Corrigan from the appropriately-named "Men's Shed" in Galway, kindly volunteered to form the lead keel and the plywood fin. The above photograph doesn't do it justice, and I will publish some better photographs a little later on. The bulb of the keel is formed from 12kg of lead, moulded around two stainless-steel bars. You can just make them out, slightly right of the centre of the image. Bonded over those bars, are two sheets of marine ply, in a NACA6318 configuration. In other words, with a symmetric hydrofoil shape. Round at the front, and tapering to a thin edge.

The mounting plate for the bolts, inside Compartment #3 still needs to be fabricated. Suffice to say, the first version fabricated by the metal shop, is too long. They will now have to re-form the part, to the specified dimensions. The plate accepts the two stainless steel rods, and the keel is bolted to the plate. The whole thing will be coated with epoxy and covered with antifoul. It's a pity, because the exposed ply finish looks particularly pleasing. Oh well. What's pleasing to the eye is also pleasing to the vast collection of sealife which will grow on anything moving through the water. Particularly at these speeds.

The hull itself is fairly close to completion of what I call "first fix." The bulk of the electronic circuits are mounted on an aluminium plate which also covers compartment #3. Until all of the sawing, drilling, gluing, sanding and grinding is complete, the electronics will be kept well away from the rest of the hull.

Once the keel plate is in, the keel can be semi-permanently attached. Some power and data sockets need to be mounted on the plate just forward of the electronics plate, and that too can be sealed in place. Some ducting and cables from the electronics compartment back to the rear compartment, for the rudder and sail trim, will complete the fourth and fifth compartments. In a slight change from earlier designs, the rudder will now be mounted through the hull rather than from the stern. This is because my original intention of using a "hobby" servo to drive each rudder has been dropped, in favour of a stepper-motor and gearing system. More on that later on, too. Instead of twin stern-mounted rudders, the rudder shaftwill now come up through the fifth compartment and through a plastic tube. The tube and the top of the rudder shaft will still be above the deck level, so water ingress shouldn't be an issue. Also, the tube will be grease-filled.

A lot of this grunt-work needs to be done before the sensitive electronic systems can be added, but those systems are under test elsewhere, so this isn't really holding up the development. Once the compartments are sealed, glass-fibre tape will secure the edges to the hull, and provide a strong hull/deck seam. Only then, will the electronics be installed.

After that, the mast and boom will need to be attached, as well as the rudder and shaft. Once the electronics are installed, the GPS module can be mounted on the deck, along with the control planes. The solar panels and the satellite communications will both be added as a last step, but not until the boat has seen some extended water testing.