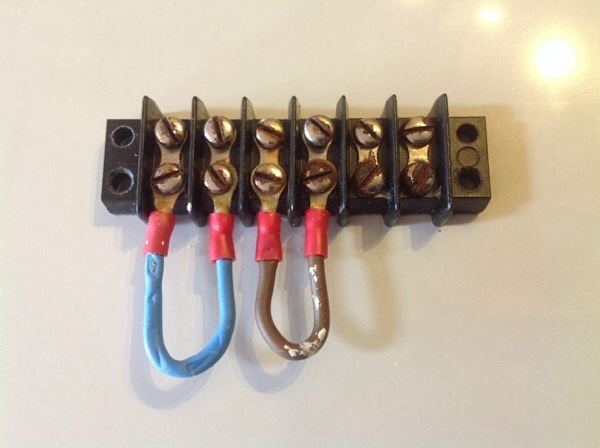 In order to test the spiffy, new Wind Direction Indicator mentioned in The Marvel of 3D Printing..., I assembled the mechanical components (without the potentiometers) and mounted it outside. As we live in a wind-swept area, with a high concentration of sea salt in the air, it was a useful test of how the system would perform. What I couldn't test was the effect of high temperature/humidity in a salt-water environment. To do that, I'd have to move to the Caribbean (which seems like a good idea, given the Irish summer we've had so far!).

Anyway, I digress. After a few weeks of spinning freely in the breeze, I disassembled the unit to examine the condition of the internal parts, and the news is not good.

If you look at the photograph above, you'll see the brass shaft, with a 624 bearing at the top, and a shaft collar slightly lower down. The bearing is mounted just under the top of the indicator, and shouldn't really be exposed to the weather. As you can see, it has distinct rust patterns on the bearing. Not good! Especially as it hasn't been hugely wet over the last few weeks, and it's only been a few weeks. The bearing movement is still intact, and it doesn't look to have troubled the ball bearings at all, but that's just a matter of time. When water seeps into a bearing, it dilutes the internal lubrication and eventually the inner ball race will rust or grind out. Needless to say, this design won't withstand a couple of months of sea air.

I suspect that the flat top of the unit allowed water to collect, and to "wick" down the indicator shaft to the bearing.

There are a couple of ways to prevent water ingress into a bearing such as this. One method uses a labyrinth design to remove any clear paths for water droplets. Another method involves adding a firm seal between the housing and the shaft. Neither of these are particularly ideal. The labyrinth mechanism is usually combined with a grease "fill" to prevent air and moisture somehow making its way through the system.

Unfortunately, a seal or O-ring would increase the shaft friction quite dramatically, thus increasing the torque needed to turn the unit. Likewise, filling the labyrinth section with some sort of water-permeable grease would also increase the torque.

For now, it's back to the drawing board. I suspect I'll probably try to use a labyrinth design, with one or two overlapping layers which are separated from each other by a narrow gap. This is based on the theory that it was rain water and not moisture in the air which damaged the bearing. Overlapping layers will prevent rainwater ingress provided that the indicator isn't immersed in sea water (and that's a big proviso). I think this is a reasonable assumption because the rust has appeared quite quickly and there are rust trails on the shaft collar.

By 3D printing the parts, again it is quite easy to prototype another part and test it out, before installing it permanently. I still need to wire in potentiometers to a working unit, and start recording wind angles, so I can determine the extent of the Kalman filter.

In other news, the deck covers have been cut out and arranged on the deck, so the boat is actually looking watertight. The deck plates won't be sealed in place until quite late in the process. I still need to wire in cable glands and other units, and I don't fancy having to try and remove a panel once it's been stuck in place with epoxy and tape.