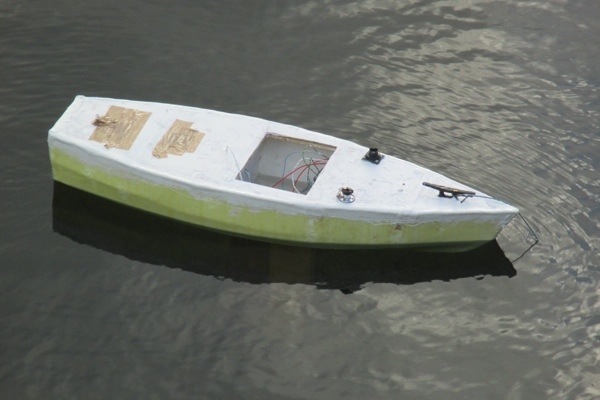 Earlier this month, once the hull and keel were mostly finished, we took the boat down to Aughinish bay to see how she performed. I have some video footage of the hull in the water, which I will upload a little later on. To ruin the suspense, Beoga Beag didn't sink! In fact, she moved through the water quite nicely, but more about that later on.

One side-effect of the water test is that the main compartment flooded, as the keel isn't completely sealed in place, yet. I forgot I'd mounted a power distribution rail inside the compartment, to see how it would fit. The following picture will show you the corrosive power of salt water.

The boat was in the water for less than two hours, and that rust formed over a period of a few days afterwards. The issue with bus bars on a boat isn't really about major rust damage like this, it is the minor corrosion and galvanic action of dissimilar metals, which can cause subsystems to be disconnected. Lose the connection to the battery and the boat will only have power during daylight hours. Lose power to the solar panels and the boat will last a few days, maybe even a week, but it is doomed.

I am planning on coating the bus bars with petroleum jelly (such as vaseline) which will prevent a certain amount of corrosion, assuming the bus bars stay mostly dry. Immerse them in salt water, and nothing will protect them.