Polar Curve for a Beneteau Figaro 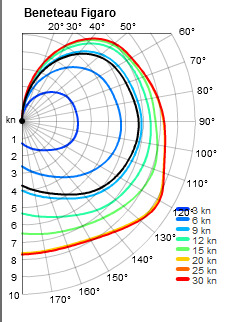 The Polar Curve is a plot of the boat speed against true wind angle for varying wind speeds. This particular curve is representative of a Beneteau Figaro yacht. The example shows that with wind speeds of thirty knots (the red line on the curve), the boat can achieve a hull speed of over 9 knots at a true wind angle of 120 degrees (a broad reach). We can see from the polar curve that this is the fastest point of sail for this particular boat. It also shows that the speed falls off dramatically as the boat gets closer to the wind (true wind angles of less than 45 degrees).